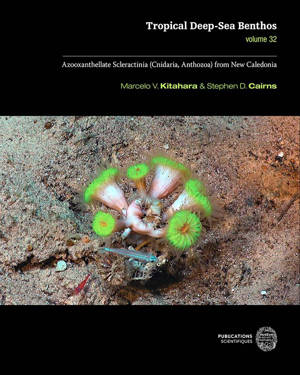 
Résumé : As a continuation of the Résultats des Campagnes MUSORSTOM, the series Tropical Deep-Sea Benthos is dedicated to the exploration, inventory, and description of the deep-sea fauna of the world, with special emphasis on the most extensive, yet remote and least explored, region — the Indo-West Pacific. The comprehensive series of marine expeditions undertaken by the Muséum national d’Histoire naturelle, Paris and the Institut de Recherche pour le Développement (IRD) continue to sample and preserve new species that are changing the current view of the systematics and, therefore, the evolution of the order scleractinia. The present volume includes the extensive results from all expeditions along the New Caledonian Economic Exclusive Zone.Standing on the eastern edge of the Australian tectonic plate, about 1,200 km east of Australia, New Caledonia has attracted the attention of several generations of coral biologists as it harbors the second largest coral reef site in the world. In 2007, these reefs received the status of World Heritage Area “Lagoons of New Caledonia: Reef Diversity and Associated Ecosystems”. Nonetheless, one of the first mentions of scleractinian corals from this region refers to deep-sea corals “the solitary corals, classified and in part described in this communication, are remarkable for a large number of new species” Gardiner (1899: 161). Since then, over 37 deep-sea expeditions off New Caledonia have taken place, enabling the most comprehensive collection of deep-sea scleractinians from the Western Pacific. Indeed, the New Caledonian azooxanthellate coral fauna is, by far, the most diverse known to date. This special volume comprises detailed descriptions of 267 species, of which 47 are new to science, and includes all scleractinian families that have azooxanthellate representatives. All examined species are illustrated, some of which have an exquisite perfect symmetry.
Sur commande
99,00 €
Fiche technique
Ean : 9782856539354
Rayon(s) : SCIENCES FONDAMENTALES
Pages : 722
Poids : 2600 g
Hauteur : 275 cm
Largeur : 220 cm
Epaisseur : 0 cm
Confirmation
Voulez-vous vraiment effectuer cette action ?